Nebraska Farmers Union is a grass-roots organization that works to protect the social and economic well-being of family farmers.

National Farmers Union was founded in 1902 in Point, Texas by Newt Gresham. Farmers Union grew out of the need for farmers to harness the power of organization to stand up against the monopolies that controlled the railroads, ag processing, ag supplies, and the grocers.

Organizing efforts In Nebraska began in 1911 with the formation of local cream and ag supply cooperatives with Antelope County being the first county organized in May 1911. Nebraska Farmers Union was first chartered into National Farmers Union on December 13, 1913. Our mission: “Nebraska Farmers Union is a general farm organization dedicated to protecting and enhancing the quality of life and economic well-being of family farmers and ranchers and their rural communities.”

NeFU has many active county and district organizations, and is very active in shaping farm and rural policy in both Lincoln and Washington DC. Governed by its members, NeFU’s policy is approved each year by the elected delegates of our state convention, and all Farmers Union officers are chosen in open elections. The current President of Nebraska Farmers Union is John K. Hansen. He was first elected President in 1989, and has been re-elected every two-year term since. Hansen also serves as the Vice-Chairman of the Legislative Committee for National Farmers Union, and also serves on several other national committees. Before moving to Lincoln to serve as President in 1990, he operated a diversified grain and livestock operation in Madison County, NE.

The current State Vice-President of Nebraska Farmers Union is Vern Jantzen, a grain producer from Plymouth, in Jefferson County.

Graham Christensen serves as State Secretary. Along with four other members, Jantzen and Christensen also serve on the Board of Directors. 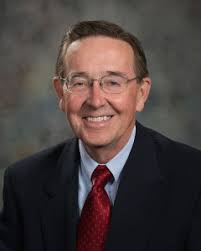 Hyannis, NE
Senator Al Davis is a cattle rancher from Hyannis, Nebraska, where his family has lived since the late 1800s. He received a BA from the University of Denver. From 2012-2016, Sen. Davis represented the 43rd legislative district in the Nebraska Legislature, where his committee assignments included Revenue Committee, Transportation and Telecommunications Committee, and Nebraska Retirement Systems Committee. Edgar, NE
Mary Alice grew up on a dryland farm/ranch in Frontier County Nebraska where wheat, milo, forage, crops, beef, poultry, sheep and dairy production were part of daily life. She and her husband Richard are producing, mainly irrigated, corn and soybeans plus seed stock Simmental and Sim-Angus bulls and heifers on their family farm in Nuckolls County, Nebraska and have been for over 46 years. Following graduation from UNL, Mary Alice taught Family Consumer Science at Nelson Junior/Senior High School. During the difficult farm years of the ‘80s, she worked as an Extension Agent-Home Economist for the University of Nebraska 50% FTE in Nuckolls County. During that time she worked with families in crisis, stress and children, food safety, nutrition, helped develop food pantries in the area, conducted professional training in addition to adult and youth programs of various types including 4-H development. Richard and Mary Alice have three adult children who currently live in Tulsa, Oklahoma, Washington DC and Basset, Nebraska. Plymouth, NE
Vern Jantzen and his wife Dolores own and operate their fourth generation family farm southeast of Plymouth in Jefferson County. They raise corn, soybeans, wheat, and alfalfa. In August of 2010 they shut down their dairy operation after 25 years.  Vern operates a custom forage bagging operation and drives truck for his brother’s custom chopping business. Vern graduated from the University of Nebraska in 1980 with a B.S. in agricultural economics and then spent almost 4 years serving with Mennonite Central Committee in eastern Bolivia. Vern has made many trips to Washington, D.C. for NFU Fly-Ins and has served as a delegate to the NFU annual convention several times.  He continues to serve as Co-Chair of the NEFU Policy Committee. Lincoln, NE
Camdyn was born and raised on a farm north of Colon, Nebraska where his family raised predominately corn and soybeans. After Graduating from Wahoo High School Camdyn joined the United States Marine Corps. After his enlistment ended he took a job with Rocky Mountain Farmers Union as an insurance agent in Casper, Wyoming before accepting a job at Nebraska Farmers Union in 2016. In 2018 Camdyn accepted the position of Legislative Aide for State Senator Tom Brandt where he specialized in ag and tax policy. Camdyn runs political campaigns and lobbies at the state level where he specializes in rural, agricultural, and tax policy. Omaha, NE
Graham P. Christensen was born in Omaha and grew up nearby on his family’s farm. Graham first opened his eyes to activism during the 1980’s Farm Crisis in which many family farmers were losing their farms. Graham and his brother would often tag along with their parents to Washington DC and across the country during those years in order to better the lives of struggling farmers. This would have a heavy influence on Graham’s life direction.
Graham graduated from Midland Lutheran College in 2002 with a Bachelor of Arts degree in Journalism, and shortly after graduation he started doing political organizing.
Then in 2007, Graham joined Nebraska Farmers Union. While at the Nebraska Farmers Union Graham worked to protect landowner rights from TransCanada and the Keystone XL Pipeline, he helped with climate change and renewable energy education efforts, and was part the Carbon Sequestration Program which enrolled 1.2 million acres into a marketplace which rewarded farmers and ranchers for storing carbon through improved soil health practices. Christensen also worked on agricultural and energy policy at both the State and Federal level.
Currently, Christensen is the Founder and President of GC Resolve, a communications and consulting company, who focuses on grassroots community development, mobilization, and education with an emphasis on environment and the creation of more resilient communities. Current projects under GC Resolve include raising awareness about Nebraska’s rising water quality issues, and educating and advocating for a change in the food production system to “regenerative” farming and ranching principles. Through these efforts, the RegeNErate Nebraska network, which includes the Nebraska Farmers Union Foundation, was founded.
Christensen owns and operates a second business GC ReVOLT, a solar and alternative energy development company, and is the State Secretary and a Director for the Nebraska Farmers Union. Graham is still actively involved in operating Christensen Farms, Inc. with his family. Neligh, NE
Art Tanderup and his wife Helen own and operate a small family farm north of Neligh, NE. They grow corn, soybeans and rye. Twelve years ago, Art made a conversion to no-till farming. A couple years later, he added cover crops to the operation. For several years, Art has utilized water sensors to reduce irrigation. They also winter some cattle.
Art grew up on farms and ranches in northeast Nebraska. He graduated from Wheeler Central High School in Bartlett. He has college degrees from Northeast Community College, Wayne State College and the University of Nebraska at Omaha. He taught school in Naper, Orchard and Tekamah-Herman. For three years he served as an adjunct faculty member at the University of Nebraska at Omaha. After retirement in 2009, they moved to Helen’s family farm by Neligh. The Farmers Union Livestock Commission in the early days of South Omaha. This photo was snapped on Christmas Day, 1927, and shows a brand new office and weigh-scales of the Farmers Union Co-op Association of Fairfield, NE. Since its founding in 1913, Nebraska Farmers Union has founded more than 436 cooperatives in Nebraska. Former Nebraska Farmers Union President Neil Oxton (right) is pictured with former NE Governor Charles Thone (seated) and former Secretary of State Alan Beerman at the official signing ceremony of Initiative 300 in 1982. I-300, the strongest state ban on corporate farming in the nation, was proposed and spearheaded by Nebraska Farmers Union. 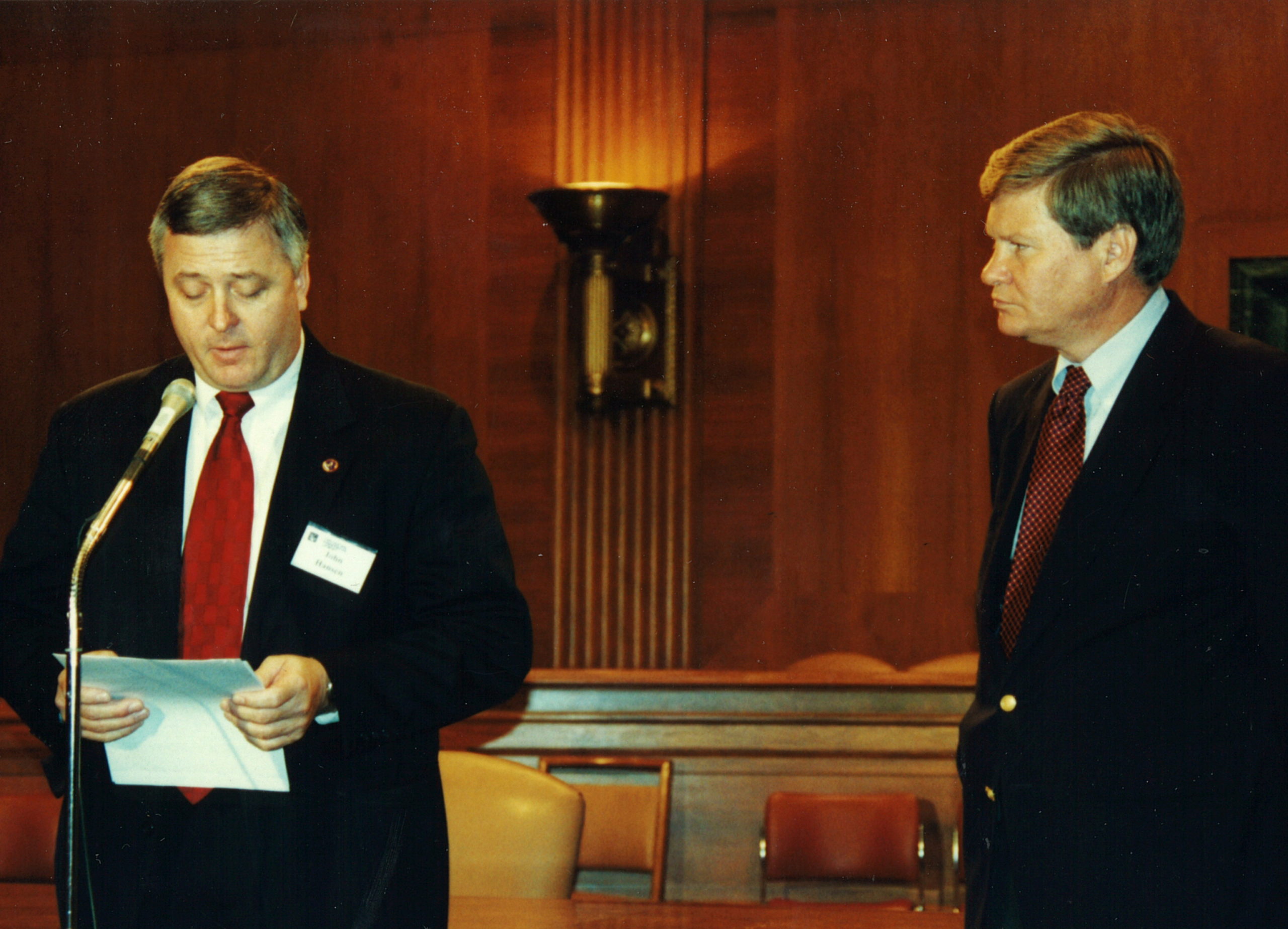 NeFU President John Hansen and U.S. Senator Tim Johnson from South Dakota do the “first ever” press conference on the merits of Country of Origin Labeling (COOL) in the Senate Agriculture Committee Room, September 1997! NeFU is proud of their efforts that lead to Congress including mandatory COOL is the Farm Bill twice.

NeFU first adopted COOL into their state policy in 1984. NeFU worked hard to sell the importance of U.S. food producers being able to identify their own products in their own domestic markets, and U.S. food consumers to know where they food comes from so they could make an informed buying decision. NFU President Roger Johnson and NeFU President John Hansen deliver the Golden Triangle Award to Senator Ben Nelson at the 2010 Fall Fly-In. The Golden Triangle Award is given to members of the Congressional Delegation that have high voting records on family farm and ranch issues. Twice a year farmers and ranchers from all over the country meet in Washington DC to talk to their representatives about current issues facing the production agriculture industry. NeFU District 6 Director Graham Christensen, Member John Goeller, and NeFU District 5 Director Ben Gotschall present Senator Ken Haar with a book about the Sandhills. This book was signed by people all over the State of Nebraska that would be affected by the Keystone XL Pipeline and given to the Senator as a thank you for standing with Nebraska landowners and calling for the 2011 Legislative Special Session that set up a process for future oil pipelines in Nebraska. NeFU President John Hansen is also the chair of the Nebraska Wind and Solar Conference, seen here staffing the display table at a recent Conference at Lincoln’s Cornhusker Marriott. Nebraska Farmers Union members gathered in Grand Island to celebrate their organization’s 100th birthday. In addition to setting state policy, electing officers, conducting their organization’s business, and participating in a wide range of issue presentations, they marveled over NFU Historian Tom Giessel’s description of NeFU’s 110 years of changing history to the good.
Giessel described NeFU’s role in the creation of the Farmers Union Exchange that in 1918 sold over $2 million of everything from all sorts of clothing and household items to farm equipment from their impressive catalog. Tom also described the size and scope of the Farmers Union Commission Company located in the Omaha Stock Yards.
On the policy front, Giessel described NeFU’s pivotal role and partnership with George Norris in the creation of Nebraska’s unique Unicameral Legislature and its 100% public power system. NeFU was the national and state leader in the creation of local cooperatives, organizing 445 since 1911. In 1983, NeFU spearheaded the successful citizen initiative petition drive that won 57% voter support to put the strongest corporate farming ban in the nation in the state Constitution that lasted 20 years. No doubt, NeFU is a “can do” organization because it harnesses the power of organization. NeFU President John Hansen appearing on CNBC to discuss flooding and its effect on agriculture in the spring of 2019 from NET Studios in Lincoln. Photo by Matt Gregory 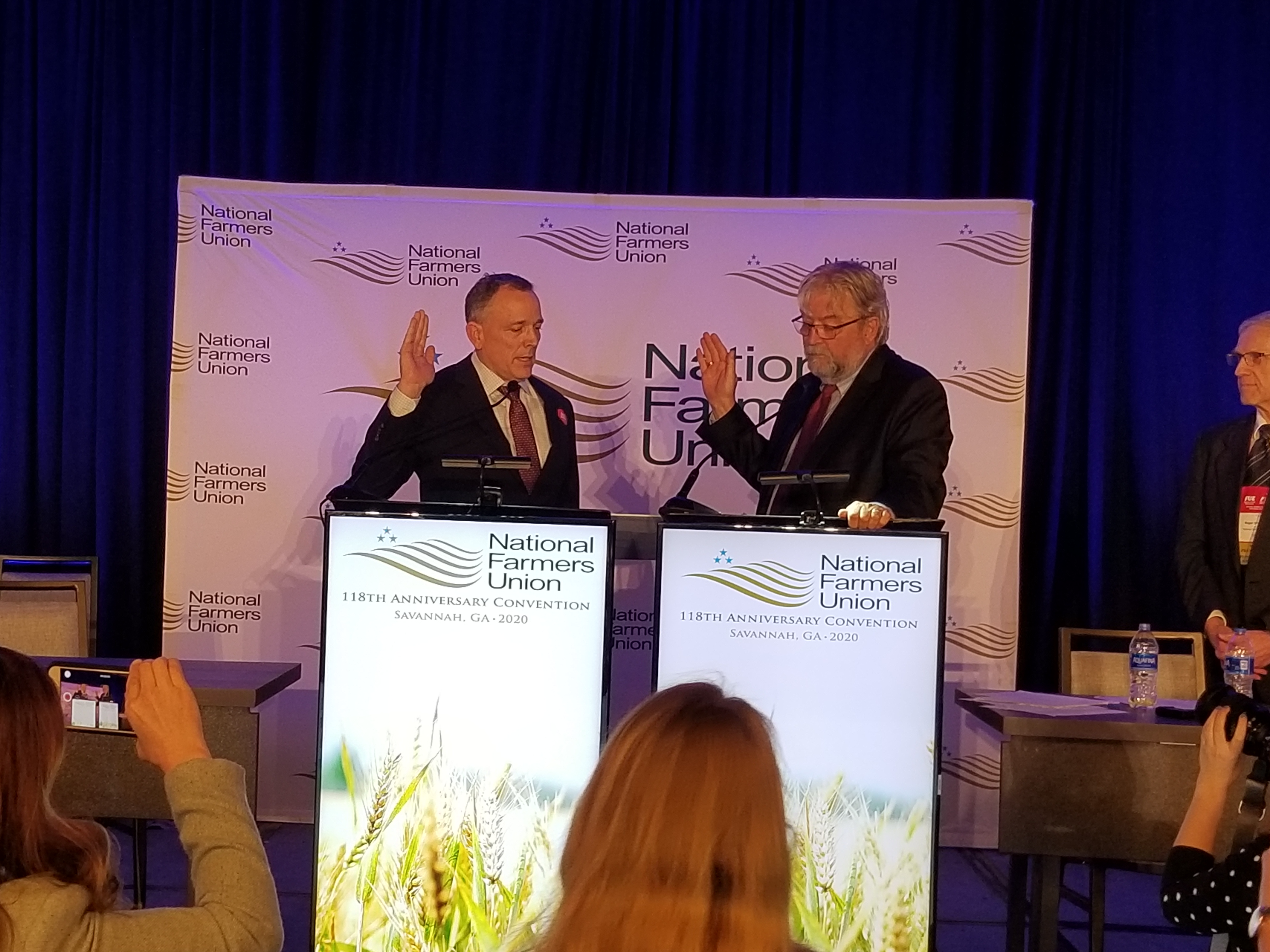